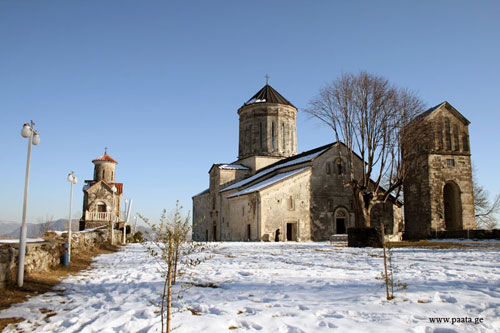 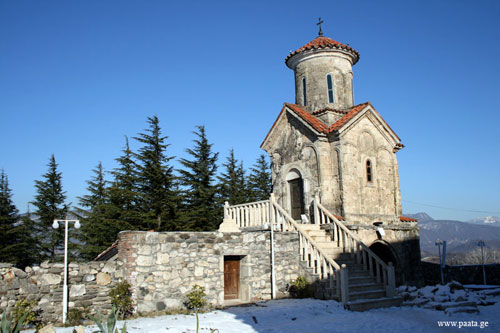 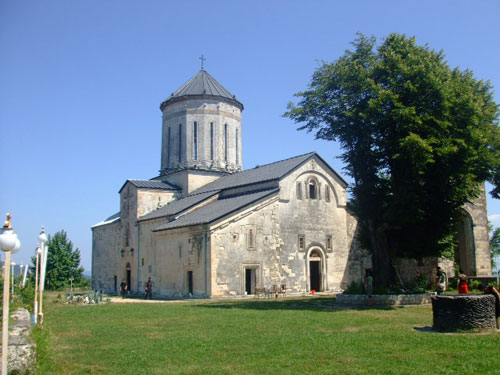 Martvili-Chkondidi Cathedral was built late in the 7th century. Revered as the gem of Georgian masonry, this cathedral rests on the roots of the old oak tree.
During the 10th century, King of Abkhazia Giorgi II, designated Martvili-Chkondidi Monastery as episcopal center. Cathedral retained its name.
Martvili Monastery was considered a major educutional center. It is the final resting place of King Bagrat IV, whose contributions to the cultural and educational development of Georgia are immense.
As a cultural and educational center for the entire western Georgia, this center not only created original literary works, but also translated many pieces to and from georgian. Some of the most famous Georgian Religious philosphers and educators who worked and lived at the Martvili Monastery.
Among them the most famous was Giorgi Chkondideli who was a mentor and trusted advisor to King David the Builder.
Martvili Monasterial Complex has a strategic geographic location from where most of western Georgia can be seen. The main Cathedral is named "Blessed Vergin Repose Cathedral". During the Turkish-Arabic invasions it was almost completely destroyed, but in the 10th century Giorgi II rebuit it.
Some of 14th, 15th, 16th, and 17th century frescos are still preserved in the main Cathedral and they represent some of the highest quality craftsmaship in the Georgian history.
To the north of the Catherdral there is a miniature stone church which is called Holy Christmas Cathedral or Church of Chikvanebi
Off to the west there is a tall tower which was place of prayer and worship for many receive blessings from the mesveti monks as late as the beginning of the 20th century.
Martvili Monastery remained active until Soviet Union anexed Georgia. After several decades of inactivity, in 1998 Georgian Patriarch Ilia II reopened Martvili.
In 2007, with the prayer of Leading Episcopos Peter of Chkondidi, Matrivili became a monasterial complex again. Patriarchial residence was built on the Cathedral grounds. Monastery established St. Andrew's Monastery of Fathers and St. Nino's Monastery of Mothers. Leaders revived monastic community living for both the monks and mothers. Parts of the monasterial complex are still undergoing construction - including brand new buildings and restorative works on existing buildings.